“The history of the Baudelaire Society is landmarked with so many wonderful years! How many were the noblemen with whom I rubbed shoulders after discovering, early on after the Great War, this Baudelairean cenacle at Saint-Germain-des-Prés. From Paul Bourget to Gilbert Lely, so many were the keen contributors to the Baudelaire Society Dictionary whom I heard debating their favourite topics in accents of the utmost purity, flowing like a great, majestic river, sweeping words along that transmuted everything as they passed. And countless were the battles we waged from 1925 onwards, jousts that were literary as well as artistic and legal, labouring to have our censored poet rehabilitated, almost a quarter-century before the appeal lodged by the Société des Gens de Lettres.

The so-called “rehabilitators” of 1949, on the other hand, were revoltingly mealy-mouthed. They had artfully sidestepped the thorny issue of the writer’s freedom of expression and of the limits with which the courts of the Second Empire had circumscribed it. We at the Baudelaire Society were unafraid to voice our opinions on these highly controversial subjects, notably winning to our cause Jules Jeanneney, the eminent lawyer and President of the Senate, in late 1936 or early 1937. This man of letters with his incisive mind deployed an uncommon intellectual courage, thanks to which we led our Baudelaireans to victory, securing the concession of a moral rehabilitation, for lack of the outright quashing of the 1857 judgement.

Who today can remember the decisive victory of Baudelaire’s bust being admitted to the Luxembourg Gardens in 1941? Doubtless, the very unambitious brochure by our charming poet, René-Albert Fleury, did relate a few stages in our struggle. Even so, it would have taken a thorough investigation by an accredited historian to retrace the course of our Baudelaireans’ concerted action. This was an epoch-making action that opened the way for the Senate to fall in on our side at a time when the Senators viewed Baudelaire’s moral rehabilitation as a mere gesture of bravado in the face of the judicial authorities.” 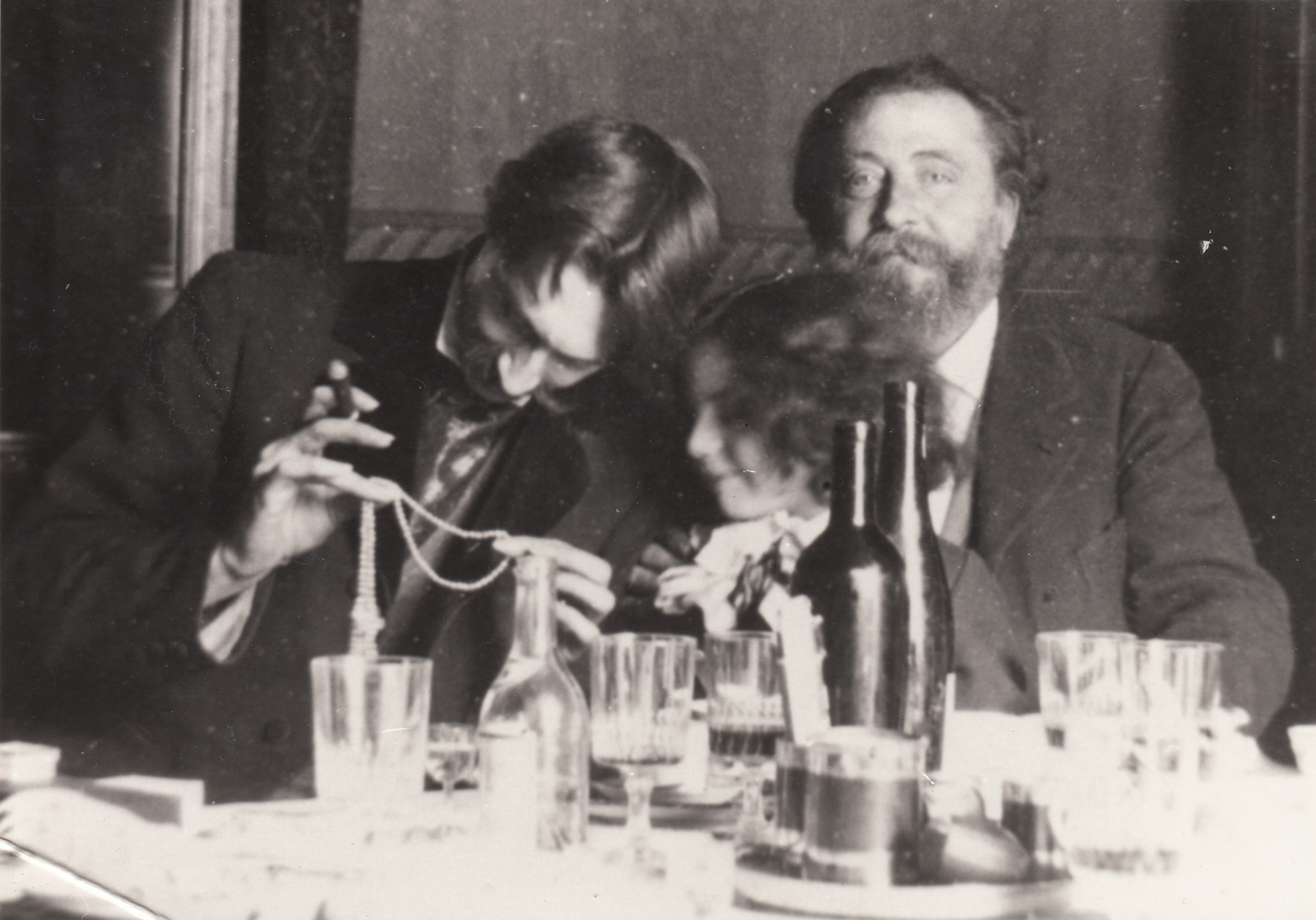 Catulle Mendès, the first President of the Baudelaire Society from 1872 to 1903 (right), a friend of Baudelaire and the publisher of the New Flowers of Evil with Henri Barbusse, his son-in-law who, in 1916, succeeded to Comte Henri du Pont-de-Gault-Saussine as the Society’s Honorary President. 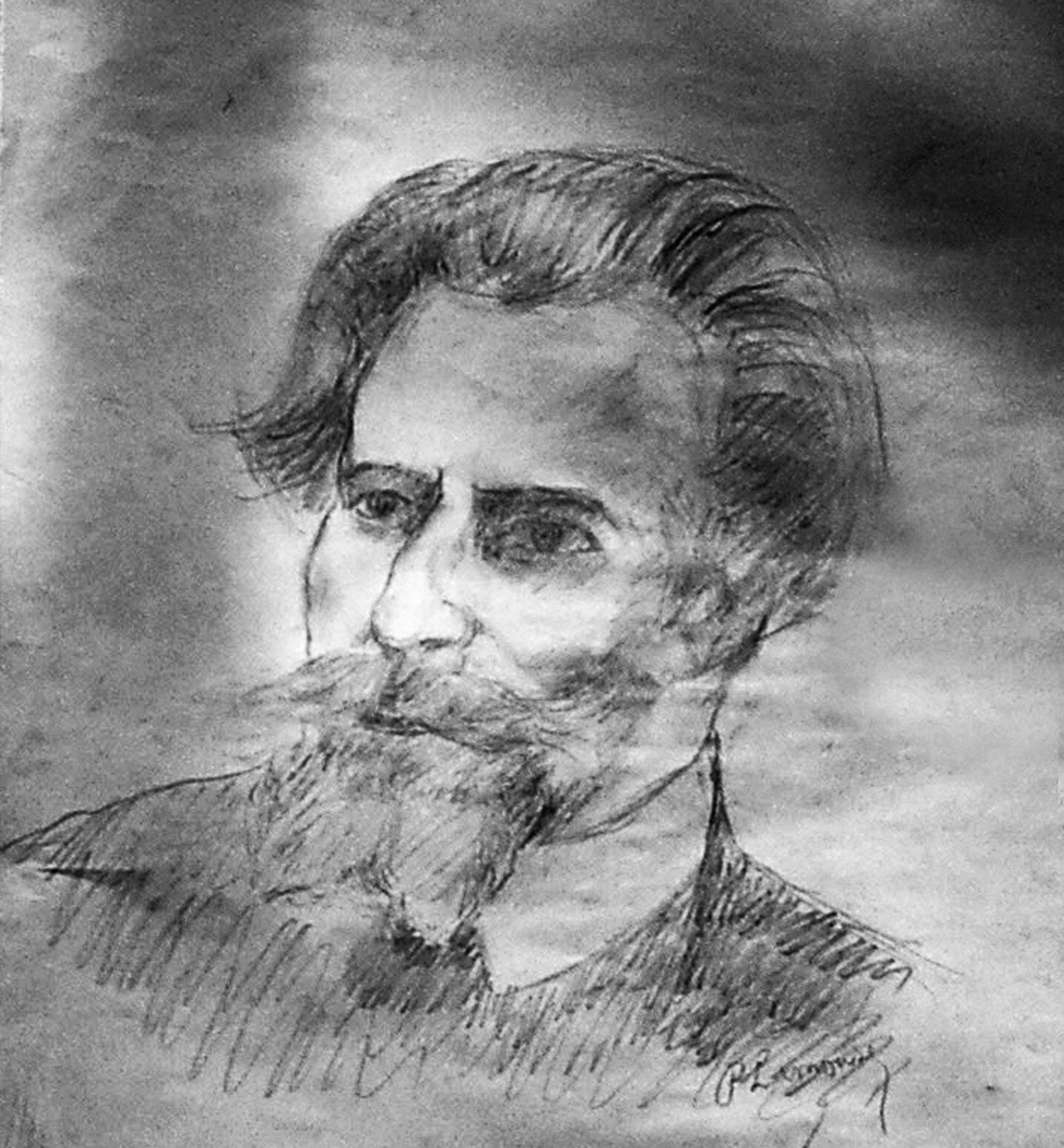 Portrait of Victor-Emile Michelet (1861-1938) by Limouse. The curator of the Flowers of Evil Museum, managed by the Baudelaire Society from 1902 to 1913, Michelet introduced Limouse to the close friends of Barbey d’Aurevilly. 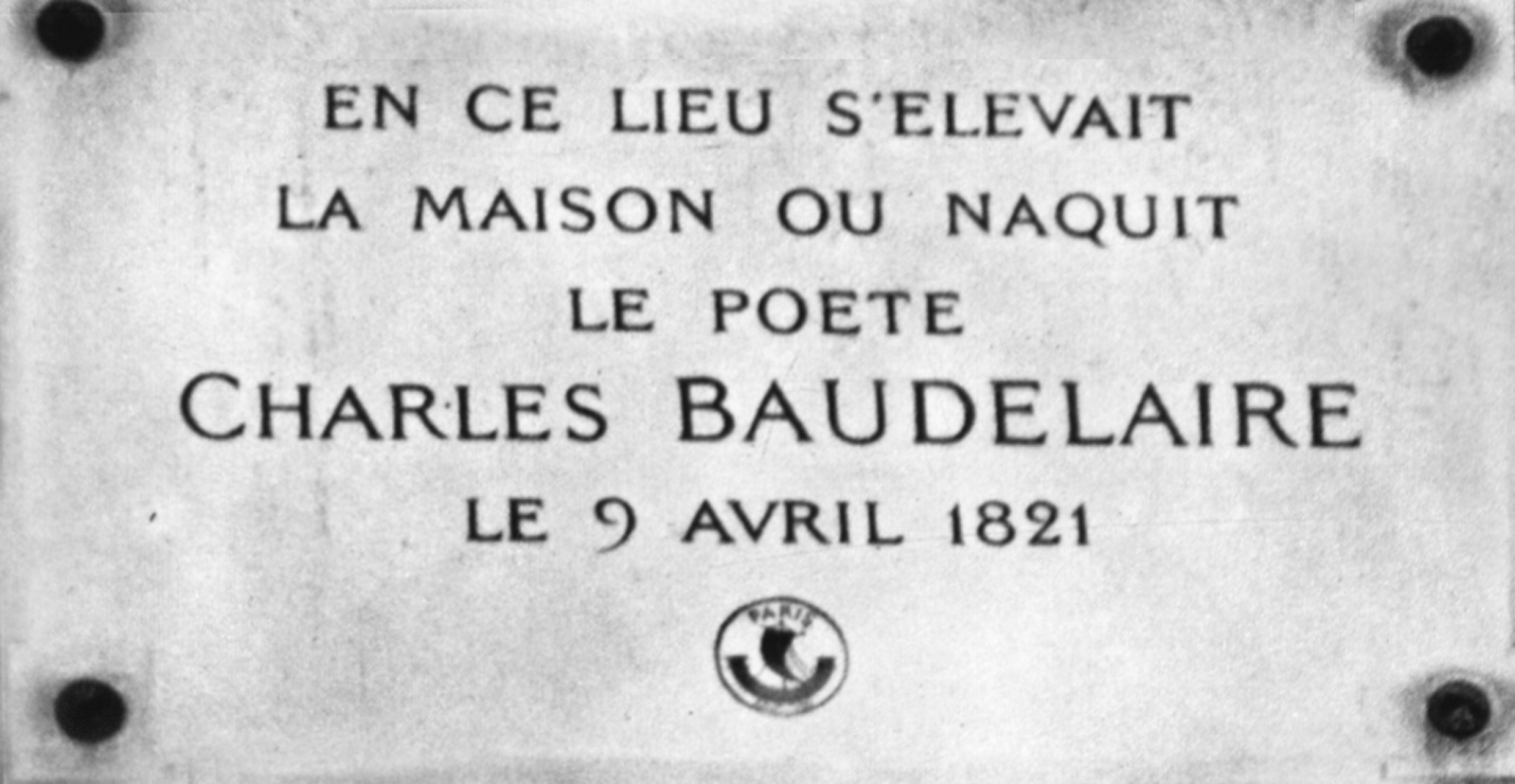 The plaque commemorating the centenary of the poet’s birth, affixed in the Rue Hautefeuille in April 1921, at the Baudelaire Society’s initiative, as the outcome to a sharp dispute with the Préfet de la Seine (the government executive for Paris). 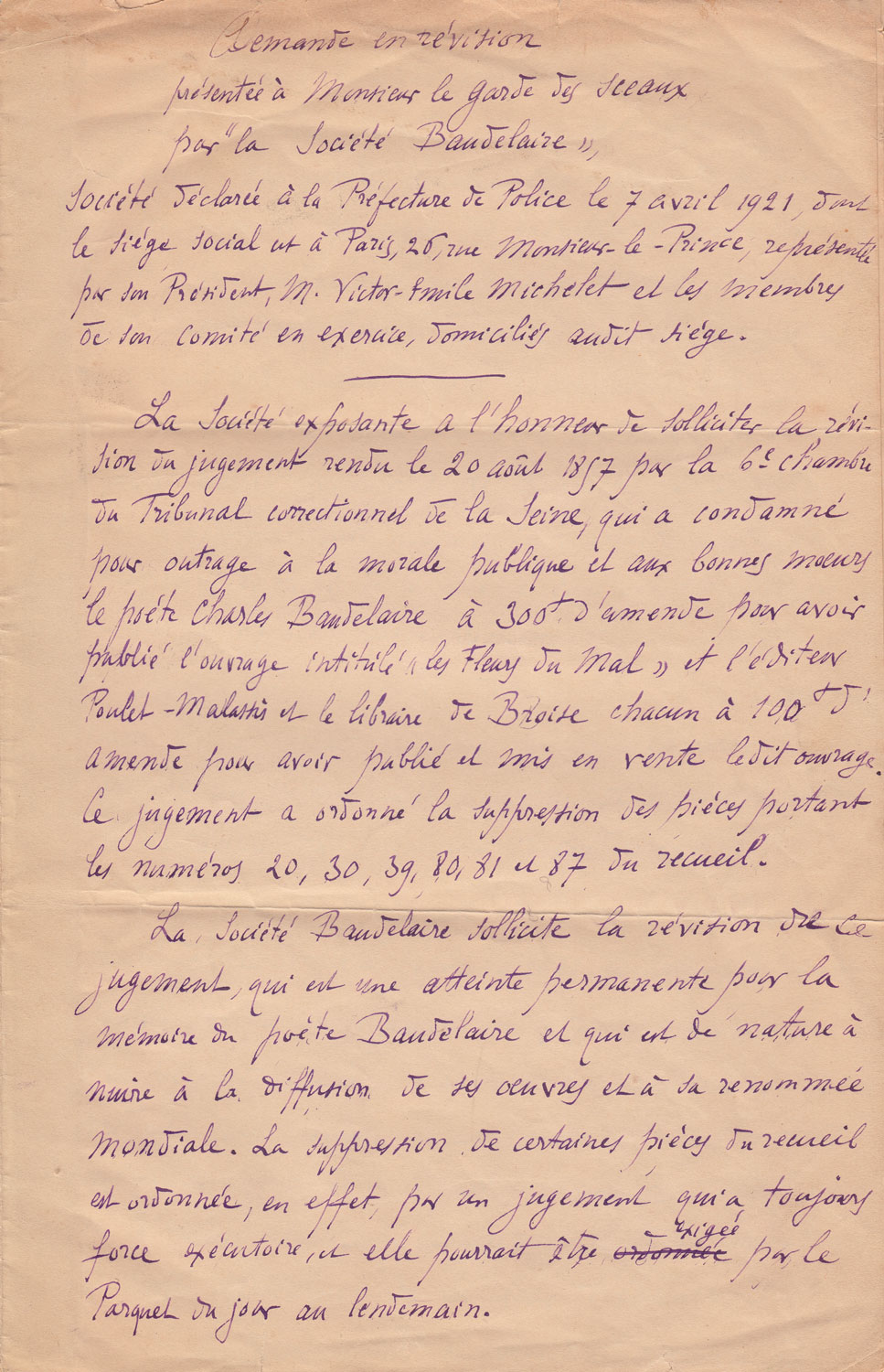 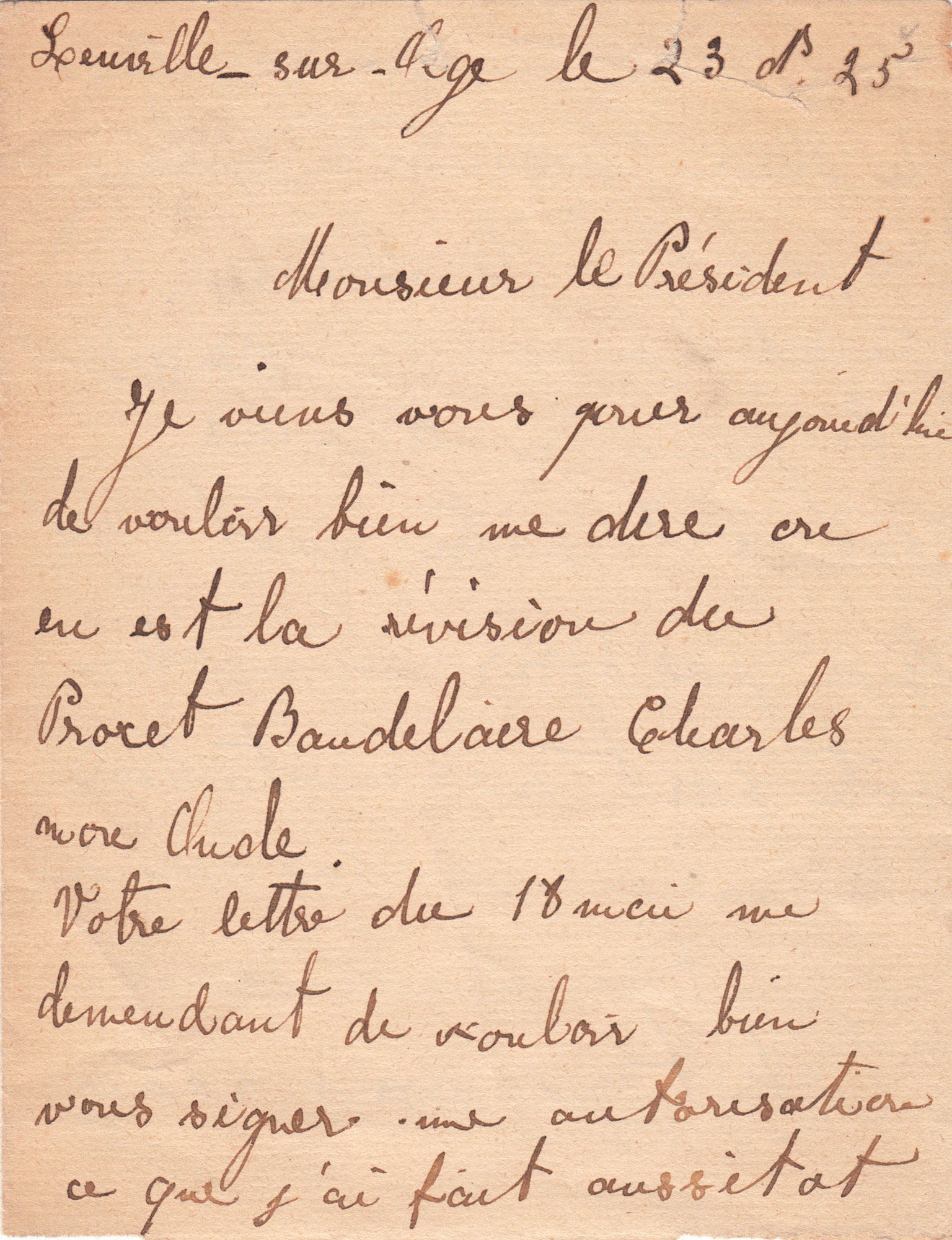 A letter from Mrs. Blanche Dutertre, née Bertrand, Baudelaire’s great-niece and the last of his line. Aged, infirm and having fallen on hard times, in November 1927, she received at the request of the Baudelaire Society a literary bursary from France’s Ministry of Public Education and Fine Arts. 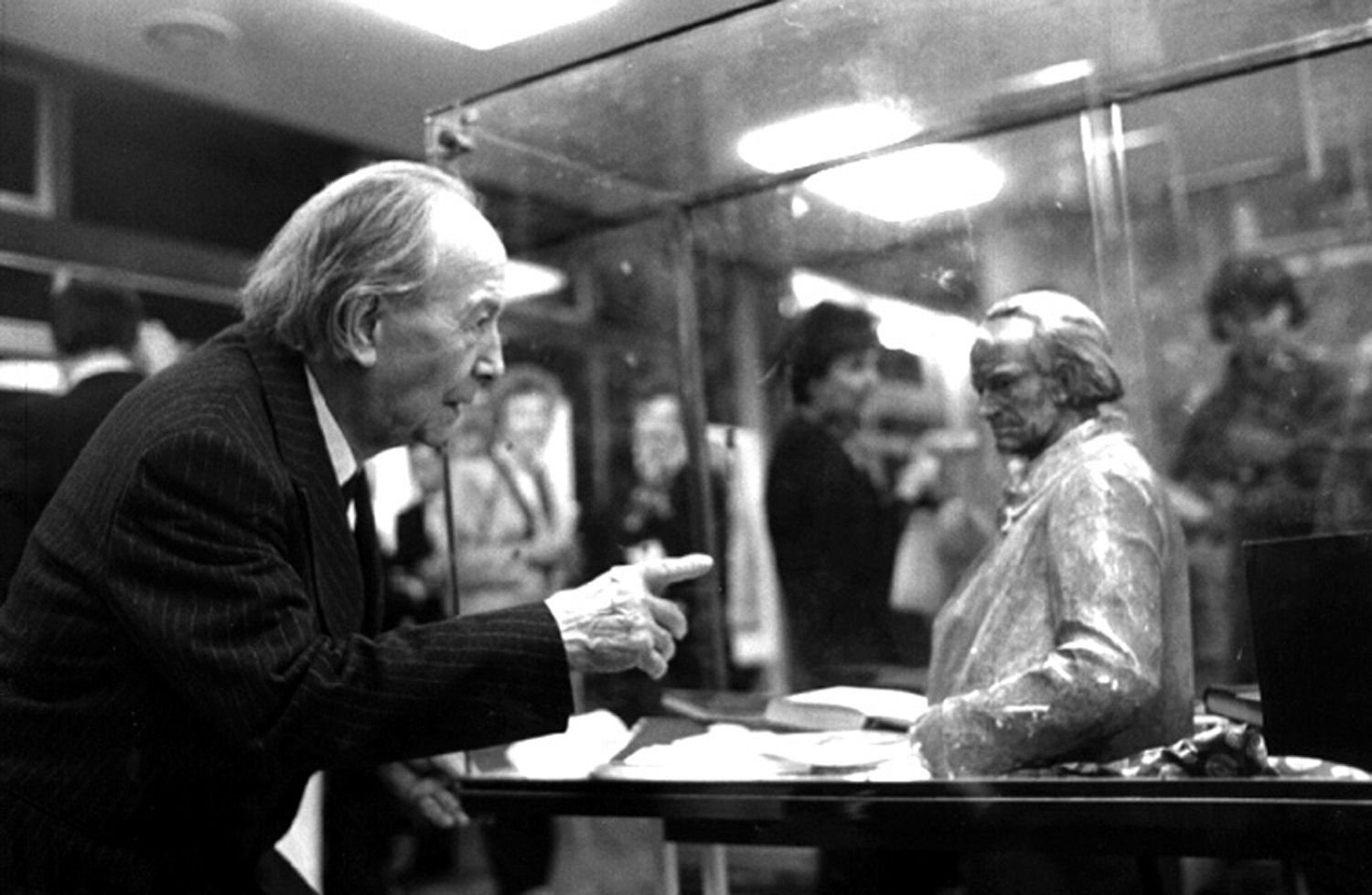 Limouse, President of the Baudelaire Society, pointing to the model of Baudelaire’s bust fashioned by Fix-Masseau; it was exhibited in the Flowers of Evil Museum during the five years of negotiations with the Senate before the sculpture was installed in the Luxembourg Gardens in 1941.

A point of information from the Senate Quaestor to Louis Vauxcelles, the second President of the Baudelaire Society Executive Committee from 1903 to 1940, confirming the cost implications of installing the bust of Baudelaire in the Luxembourg Gardens.