“What distinguishes Limouse’s Baudelairean painting from the praiseworthy attempts elsewhere, saving Rodin, is that his interpretations do not seek to procure a bland entertainment arising from a chance encounter of an artist with a poet. By dint of several decades devoted to lengthy, intense meditations on a poem, and sometimes even a single line of verse, the master Limouse succeeded in eliciting the emergence, through Baudelaire’s art, of The Flowers of Evil in their universal dimension.” 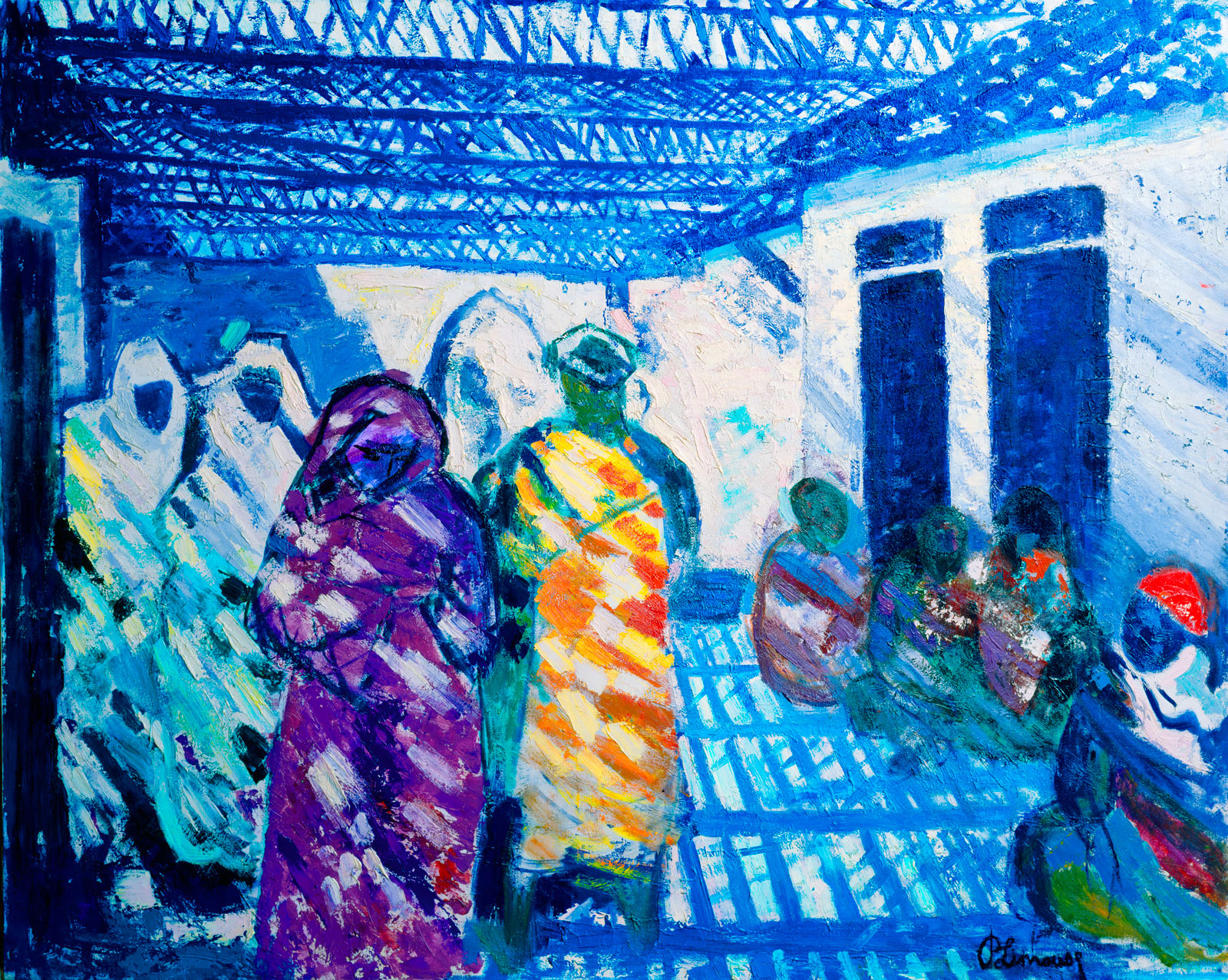 As drawn-out echoes blend, when far they range,

Into a blurred, unfathomed unity

As vast as night or light’s ubiquity,

So perfumes, sounds, and colours interchange.

This painting is a late evocation of Africa by the octogenarian Limouse. The location is Marrakesh, near the scenes of his North African childhood. As we register its initial impact we are inclined to assume that, perhaps because of the nostalgic appeal of the subject, it is a rapturous reminiscence. However, it contains both much that its captioning lines would lead one to expect, and much that they would not.

At first glance we are impressed by the way in which Limouse has arranged for us a setting in which ‘horizontal correspondences’ can be expected to thrive. Baudelaire’s metaphor of echoes uniting and blending in the distance has led the artist to provide us with a deeply receding perspective of a narrow covered courtyard between the hard surfaces of which such echoes can be expected to resonate. At various points in this resonant setting are placed human figures engaged in activities — strolling and talking — which in such an area are likely to set the echoes ringing and rebounding.

The central figure, who dominates the scene because of his shimmering gold and orange robes, is walking resolutely away from us down the unobstructed length of the court, the echo of his footsteps no doubt travelling before him. Advancing towards us, having just passed closely by his left side, is an attractive young woman wearing a sumptuous djellaba in several shades of purple; meanwhile two white-clad figures also approaching, further left and in the middle distance, appear to be conversing intimately, as does a remoter group seated on the right.

Our first clue that something might be amiss is provided by the fact that all the crouching figures on the right look drably dressed, almost the only splash of colour among them being the bright red hat of the nearest. But for the moment we remain captivated by the composition as a unity and by the fascinating mastery with which light has been distributed here. The key feature of alternating sunlight and shadow engenders a repetitive pattern of narrow strips created by the struts and interstices of a broad horizontal trellis overhead. The bars of alternating light and shade enhance the composition’s power in two ways: first, when projected onto the floor, they emphasize the receding axis of the courtyard down which the echoes are travelling; secondly, by falling obliquely onto the figures beside, forming orthogonals on the floor, they set up a vibration which finally wrings echoes of its own from the long responsive courtyard. The criss-cross lines of the trellis itself, visible overhead, in counterpoint to the pattern of Roman tiles on a roof to our right, to say nothing of the clash between the alignment of the right-hand wall and the floor-orthogonals, all contribute to a brilliantly orchestrated confusion of sound in which human words and footsteps are only part of the story. One may add, too, that the reverberant pattern, combined with the presence of intense sunlight, gives an impression of throbbing heat so great that the natural fragrance of the human body in such circumstances cannot remain absent from our thoughts. Thus it is that Limouse advances, from Baudelaire’s initial image of converging echoes illustrating unity within diversity, to the horizontal correspondence of ‘perfumes, sounds and colours’ with which the quatrain ends.

However, the really original, inspired, and challenging feature of this masterpiece has yet to emerge, this delay being appropriate since it does not at first divulge its secret to the spectator. But as the artist’s purpose unmasks itself we realize that we are being induced to involve ourselves in the action: by those inviting floor-orthogonals and, most artfully of all, by the sumptuously dressed male who leads us into the picture and the equally well-adorned female emerging from it towards us. We are thus unwillingly conscripted into a two-way procession of the affluent, because they only are breaking the picture-surface and linking picture and spectators. Then, so conscripted by the master of stage-by-stage revelation, we find ourselves wondering rather uneasily how much ‘correspondence’ there is between the coming and going rich, concentrated mainly to our left, and the inertly crouching poor on our right. And then we see it, so minimal that it is a scandalous travesty, the glance that is passing — furtive and voyeuristic on the affluent side, unhappy and resentful on the deprived one — between that advancing female and just one of the squatting paupers. That glance is exchanged between members of the same species biologically and yet economic disparity has assigned them to and confined them within different dimensions, has given them divergent outlooks, opposing perspectives. The young woman will hastily press on, emerge from the picture, try to forget the glance. But we are asked to enter it, and the resulting moral dilemma is staring us in the face. Are we to follow the example of those prosperous tastefully-dressed individuals who are passing by on the other side, or are we to extend our concern and expand our sense of fraternity to include their less fortunate cousins? By assigning a wider meaning to the term “corrupted” – one of the attributes of the heady scents that wreath the tercets – Limouse bravely points out that the ‘horizontal correspondence’ which most clamours for our attention today is the oneness of the human family, and that we are all involved in each other’s destinies.