“As a Baudelaire historian and translator of The Flowers of Evil, I would argue that Limouse is without doubt the greatest artistic interpreter of the poet’s work that the world has ever known.”

“Of utmost account to Limouse, outweighing the picturesqueness of locality, were light, colour, masses in motion. The intense symphonies of reds, greens and yellows bathed in the bright light of the interiors or corroded by the sun to the point of dissolution, ultimately disappearing into an almost neutral tone. Masterly draughtsmanship, widely-drawn and capturing motion, provides the framework for the colour laid in generous brush strokes with full impasto, and behold, large canvases take shape, with dimensions exceeding three metres.” 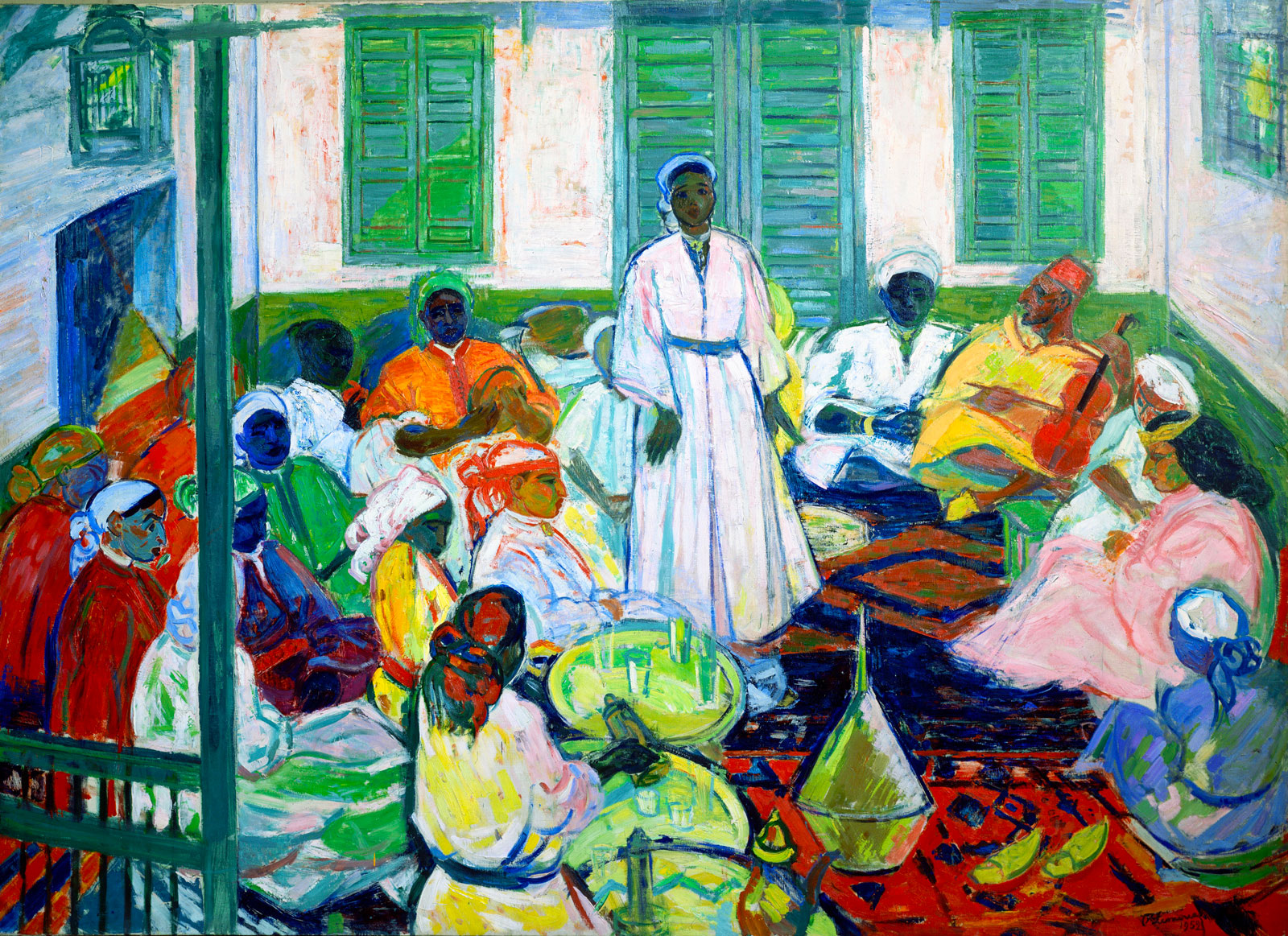 Come then, and find what strange enchantments cheer

An afternoon that lasts for evermore !

This arresting composition relates to the penultimate part of Baudelaire’s poem which introduces human hopes that life’s voyage can be extended into the Beyond; and which then incorporates from Tennyson’s ‘The Lotus Eaters’ the concept of a perpetual afternoon. In order to glimpse such an afternoon the artist presents us with a vast crowd scene developed, in memory of his departed Beloved, from some scenes she had sketched years before of a bride’s wedding-party in Morocco. A standing female dancer is shown entertaining a mainly seated and almost entirely female gathering; and of supreme importance is the fact that the standing dancer, alone of the company, is aware of the spectator and looking out of the picture towards him.

Limouse has chosen, as he not uncommonly does, a lofty viewpoint so as to reveal the character and arrangement of the crowd as a whole. The interior he portrays has an air of tightly shuttered seclusion, there being no light-source in relation to which characters can be given three-dimensional solidity. Even the human features mostly lack animation, the often eerily green or blue-grey complexions wanting the blush and brightness of youth; and the figures are slumping listlessly as if in a dimension where they are less than certain that they exist at all. Here indeed lies the whole point of this painting, for they represent a situation, a continuation of being, about which none of us (Baudelaire and Limouse included) is entirely sure. Almost the only figures in the composition who look in the least degree confident of themselves are those performing functions familiar from their experience on the material plane: the woman pouring mint tea in the foreground next to a cone-covered tagine basket, or the two musicians accompanying the dancer.

A wholly exceptional case is the latter. For, despite the spectral shadows in which all her features are bathed, her wide-open eyes with their expressively tilted brows are staring directly at us and her dance is for us alone. She is indistinct because she is calling to us from beyond the veil, and because it is all too possible that she is an optimistic projection into the hereafter of experiences during our earthly voyage. For it is siren-voices that tempt us, as Baudelaire’s poem nears its close and the end of known life approaches; and the voices soon turn out to be those associated with memories of our truest friends, and — as portrayed in this magical painting — that of our great love. This painting which draws so many inert remembered details from terrestrial Morocco is in fact bravely located on the frontier of eternity; and the dynamism of heroic hope and lyrical love have imparted one focal point of dazzlingly vivid life to that otherwise shadowy area. Bereaved lovers above all can gather hope themselves from that graceful life-sized central figure in her long pale loose-sleeved gown, the skirts of which seem subtly to sway as one looks at her; and they notice how she uniquely beams beauty and a certain spiritual intensity towards them together with a pressing invitation to join her in the aery dimension beyond their material world.

All the dramatis personae pale into insignificance compared to her, indeed most of them blur off quietly into eternity, on a stage not merely confined by impenetrable backcloths and wings, but even partitioned from our living breathing perceptions by an ominous screen on the left. While a sense of containment and detachment prevails in this composition, the central character is giving us all her attention here and now and is reassuring us — as ‘Electra’ does in the poem — that she is awaiting us in the hereafter. The artist has reverently transformed what was a mere sketch drawn by the woman he loved, personified by the central figure here, into a work of art her short life had never permitted her to achieve. This painting is an act of devotion, not only to the person he most cherished in his life, but to the budding artist who had formerly been a student of his and whose vision Limouse felt impelled to exalt.