“I have never disapproved of the modernists’ speculations in aesthetics, even though I grounded my art and my teaching at the École Nationale des Beaux-Arts in the canons which governed the masters of the Venetian Cinquecento. Would Dora Maar have approached me in 1937 to advocate Picasso’s inclusion in the Baudelaire Society Dictionary if she had had the least suspicion that I harboured prejudices unfavourable to the modernists?

On the other hand, I have never called for tolerance towards the potentates of modernism. And yet, in the bitter strife in which those people engaged, seeking to wreak my undoing by their discredit, I have had the pleasant surprise of forming, and even renewing privileged alliances. I cast my mind to Malraux, whom I had known since 1929, Malraux, the zealous advocate of modernism, who nevertheless conferred upon me the most prestigious distinctions. I think also of Camus and Amrouche who together secured financing for us, so as not to extinguish too rapidly the discreet campaigns set in motion by the Baudelaire Society to denounce modernist intolerance. And how could I overlook, in this connection, the British artist, Graham Sutherland? He it was who pressed me to institute in Britain a biennale of contemporary art, on the model of the one I had brought into being in France, in 1951.

A word, if I may, on this Biennale in Menton, which I had endowed with a management structure watchful of striking a perfect balance between the modernist persuasion and others paying greater heed to tradition. What became of that balance that I had achieved, and that had engaged the discerning attention among others, of Matisse, Georges Wildenstein and the patrons of the event, the President of the Republic, Vincent Auriol, or Prince Rainier? After holding for a time, thanks to the stubborn endeavours of Dehove, Mauchant and a few faithful followers such as Cavaillès or Caillard, this balance by which we set such great store, was warped and undermined. Who were guilty of this? Modernists who infiltrated the Honorary Committee. Why? First, to foster a sense of inferiority among the members of the Biennale board of directors, by fuelling their fears of being taxed with clinging to the past. And then above all, that Board had been induced to introduce among the exhibitors figurative artists of such overwhelming mediocrity that their showcasing, expertly orchestrated by the modernists, irreversibly discredited in visitors’ minds a school of painting that claimed its roots in tradition. Confronted with such malicious manoeuvrings, the Biennale, which should have been the last bastion of resistance to the modernist hegemony was vanquished by “Beaubourian” avant-gardists, when it should have been unassailable. To have achieved this would have called for unwavering courage, as displayed by Chagall, Villon, Lorjou and others who urged me not to surrender.

Before leaving office, Malraux gave a helping hand to the ambitious search for premises in Paris. This venue was to have housed, among others, my works interpreting The Flowers of Evil and display cabinets documenting the warfare waged by the Baudelaire Society against the apostles of an art owing nothing to aesthetics, and motivated solely by speculation. After Malraux renounced office in 1969, the former minister’s promise was very soon broken by his successors. Three decades later, Robert Pandraud renewed in a letter the promise of premises. Naturally, that promise failed to materialise.” 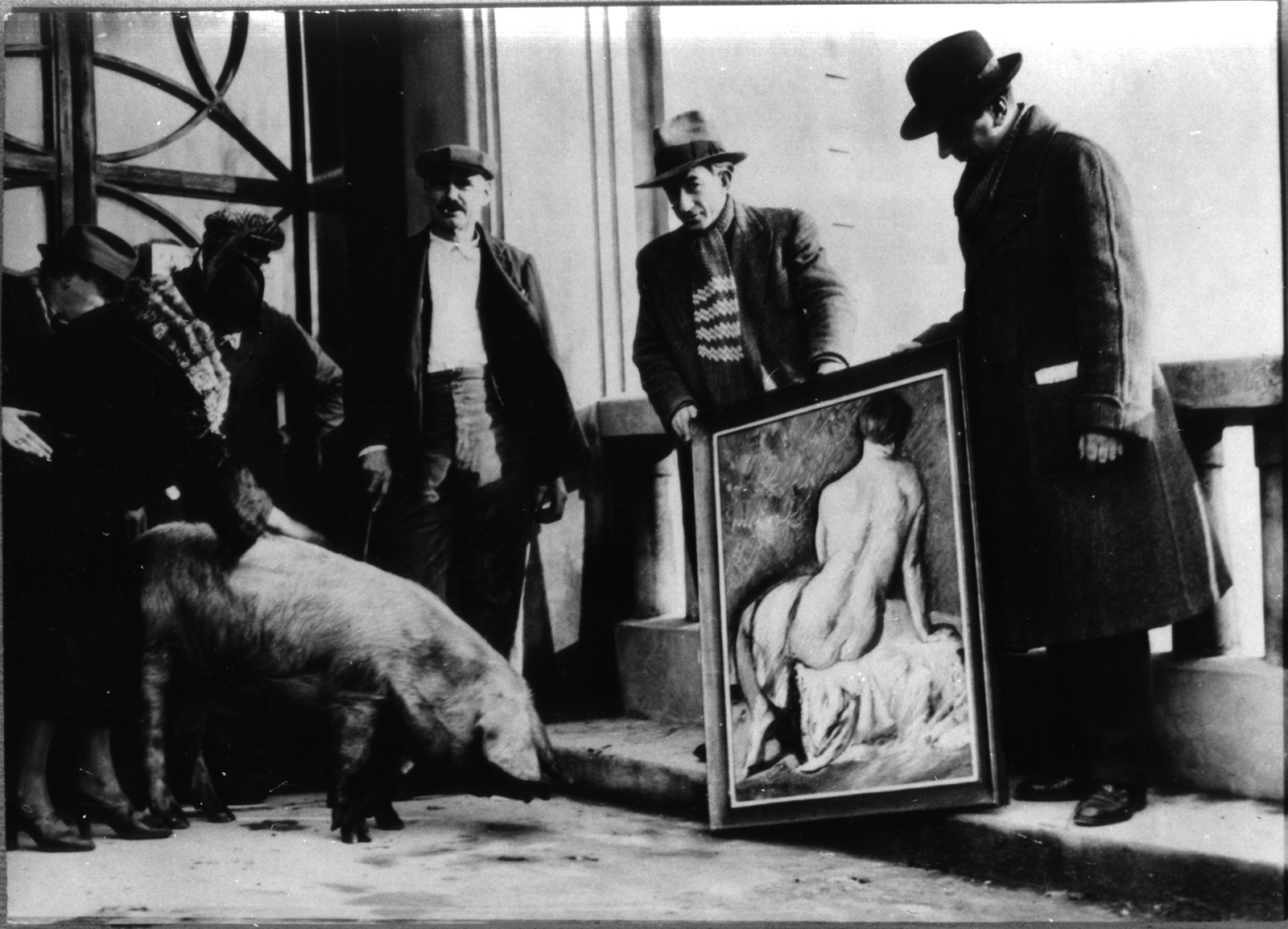 The “Salon des Échanges”, a barter fair, was put into practice by Raymond Duncan, Isadora’s brother, at Onchesmos in Epirus, during the Balkan wars in 1912-13. In 1921, this fair was given a further practical application in Paris thanks to its definition, introduced by Limouse in the Baudelaire Society Dictionary. Until 1938, this barter fair, staged by Henry Ramey, enabled traders, farmers and industrialists who regarded themselves as foreign to the expression of beauty, to barter their offers of service for works of art chosen by them, and created by impecunious artists hounded out of the public eye by the modernist oligarchy. This dissident exhibition, reported in the international press, ransomed the honour of artists in disfavour by winning the esteem of their purchasers who paid them in food, coal, medical and dental care, lawyer’s services or stays in holiday resorts. 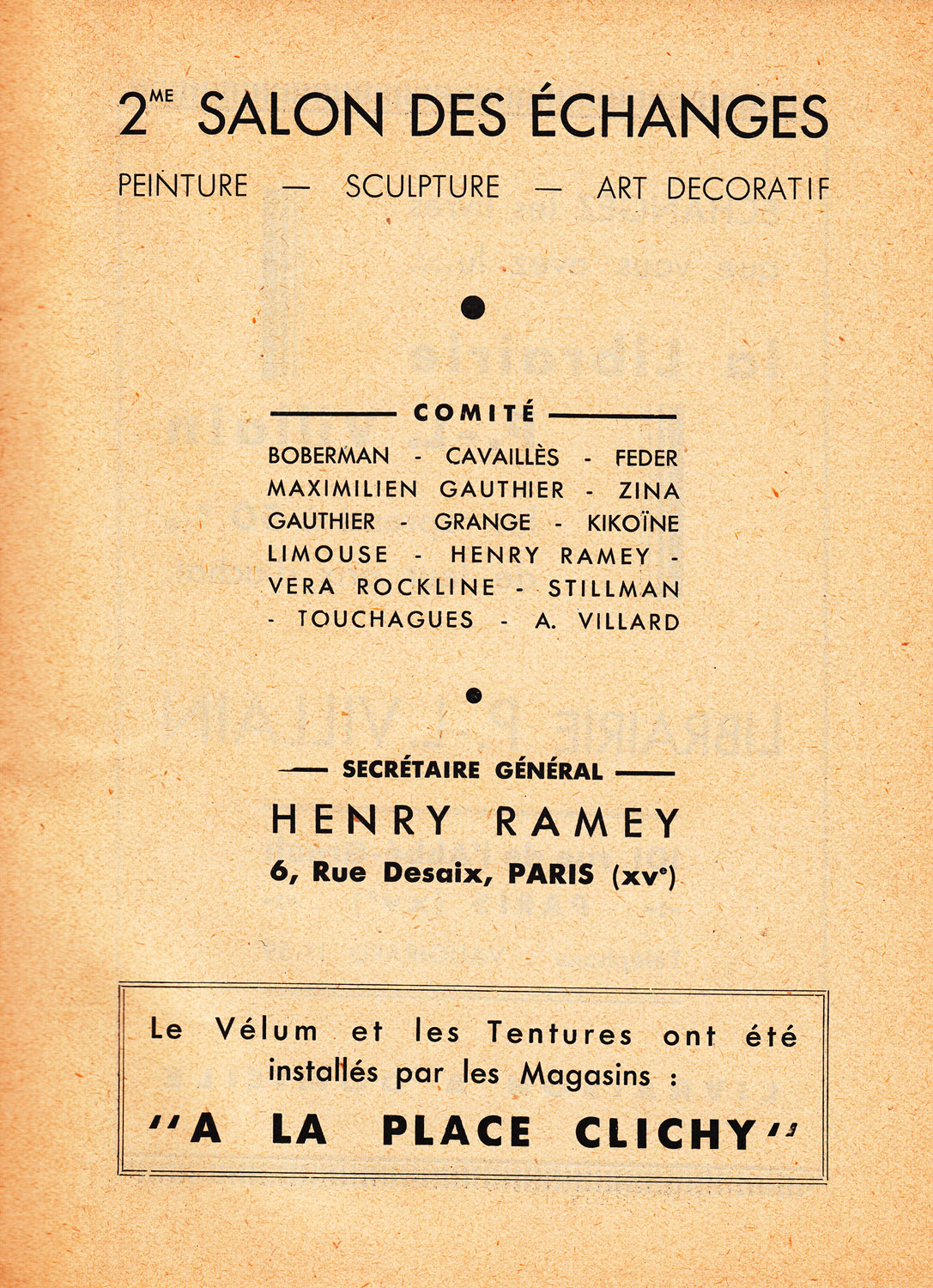 “This barter fair, held at the Porte de Versailles exhibition centre, was a brainwave of Raymond Duncan. Admittedly, I restructured it to enlist the support of the Baudelaire Society. It very soon took substance thanks to the combative ardour of our Baudelaireans, outdoing each other, such as Maximilien Gauthier, Ramey and a few others. Thus, from a mere definition intended for the Baudelaire Society, were hunger-stricken artists of the School of Paris able to trade their canvases for egg-laying hens, even a live pig, for tuition in French, and more still! Without ever injuring their self-respect and dignity.” 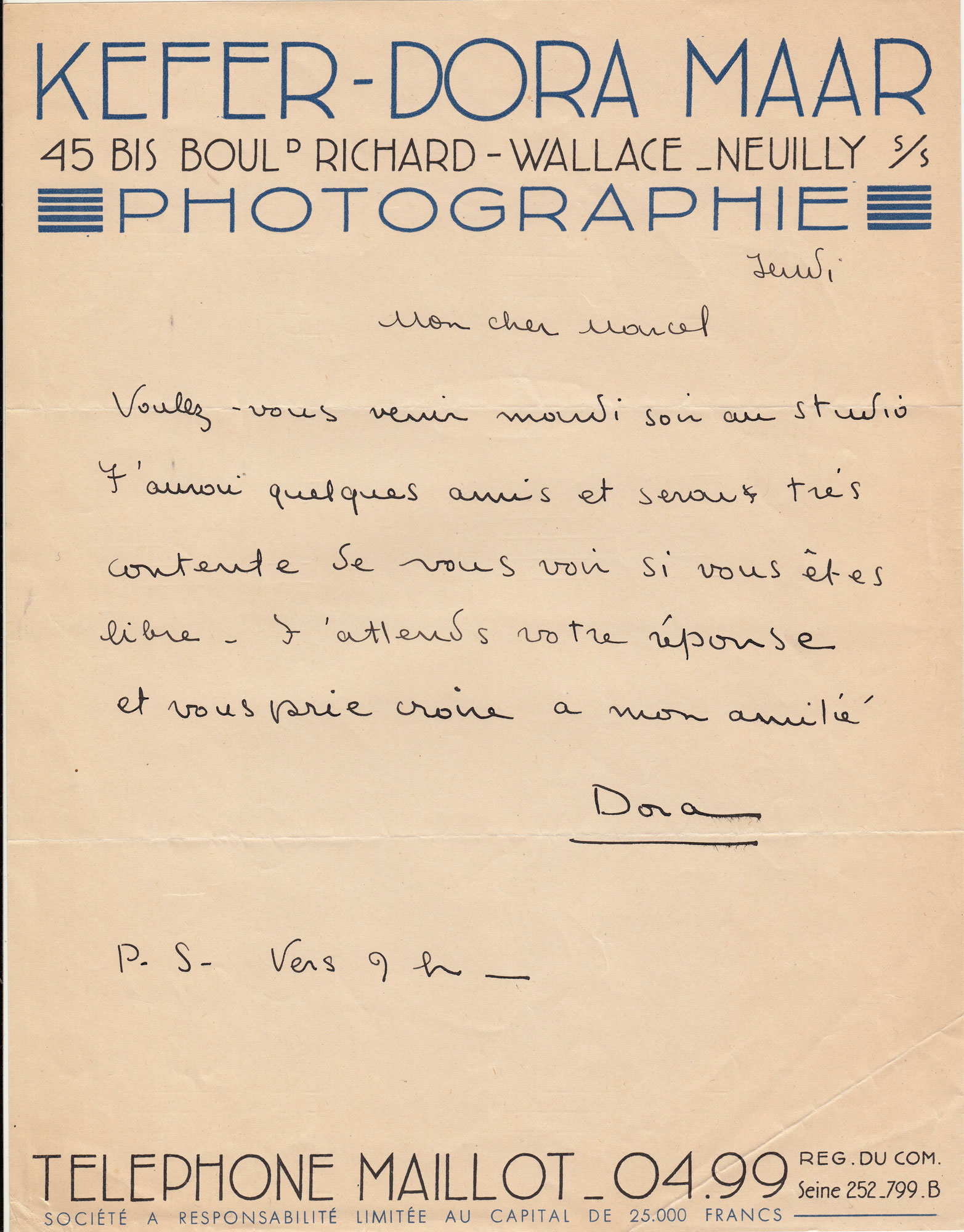 Dora Maar, who was encouraged to pursue her chosen career as a photographer through the support of the Baudelaire Society. Letter to the Baudelairean and exegete of Courbet, Marcel Zahar, who introduced Dora Maar to Limouse in 1937. 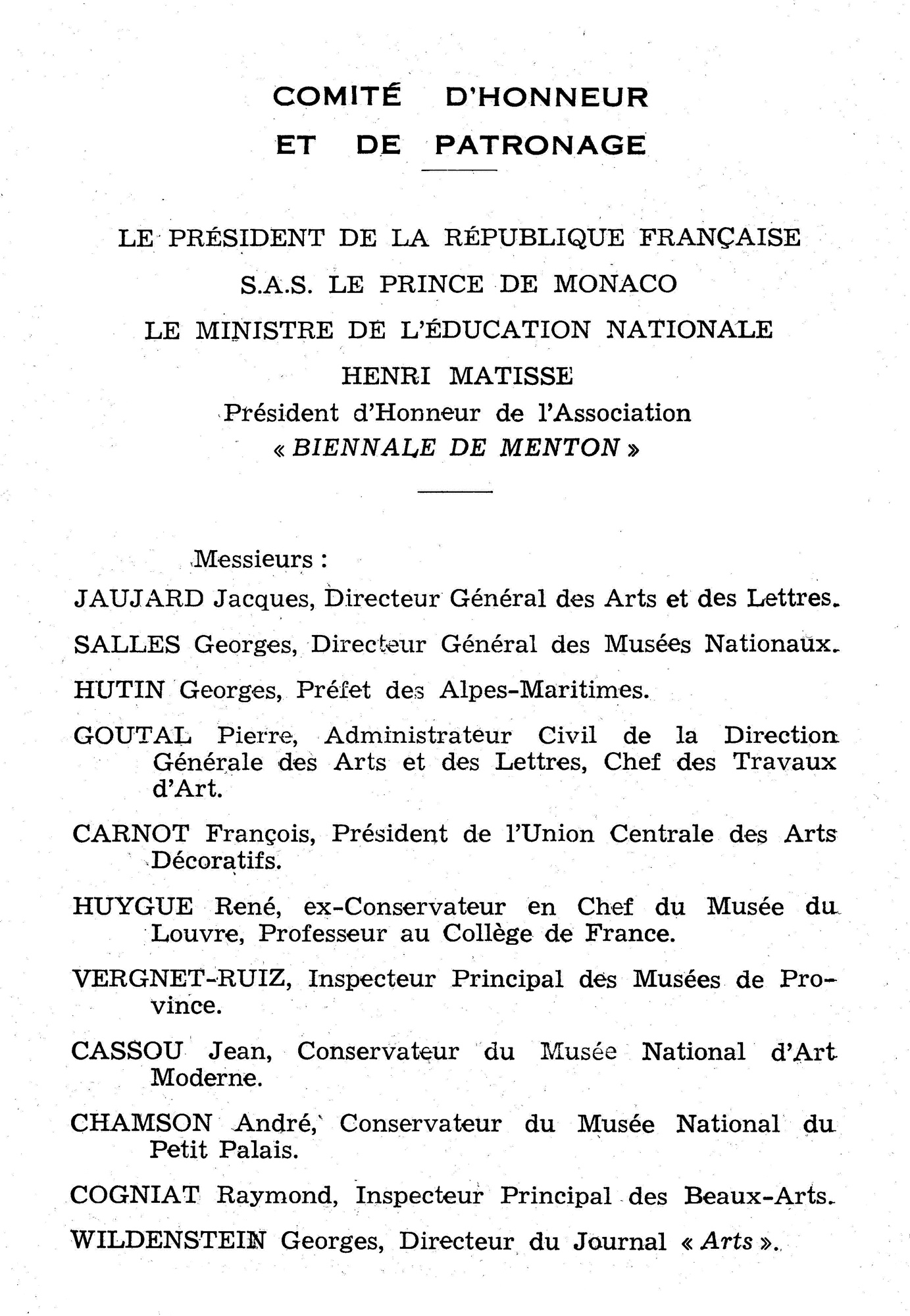 The first biennale of contemporary art in France, conceived by Limouse in 1949 to unify international resistance to the undue predominance of the “modernists”. 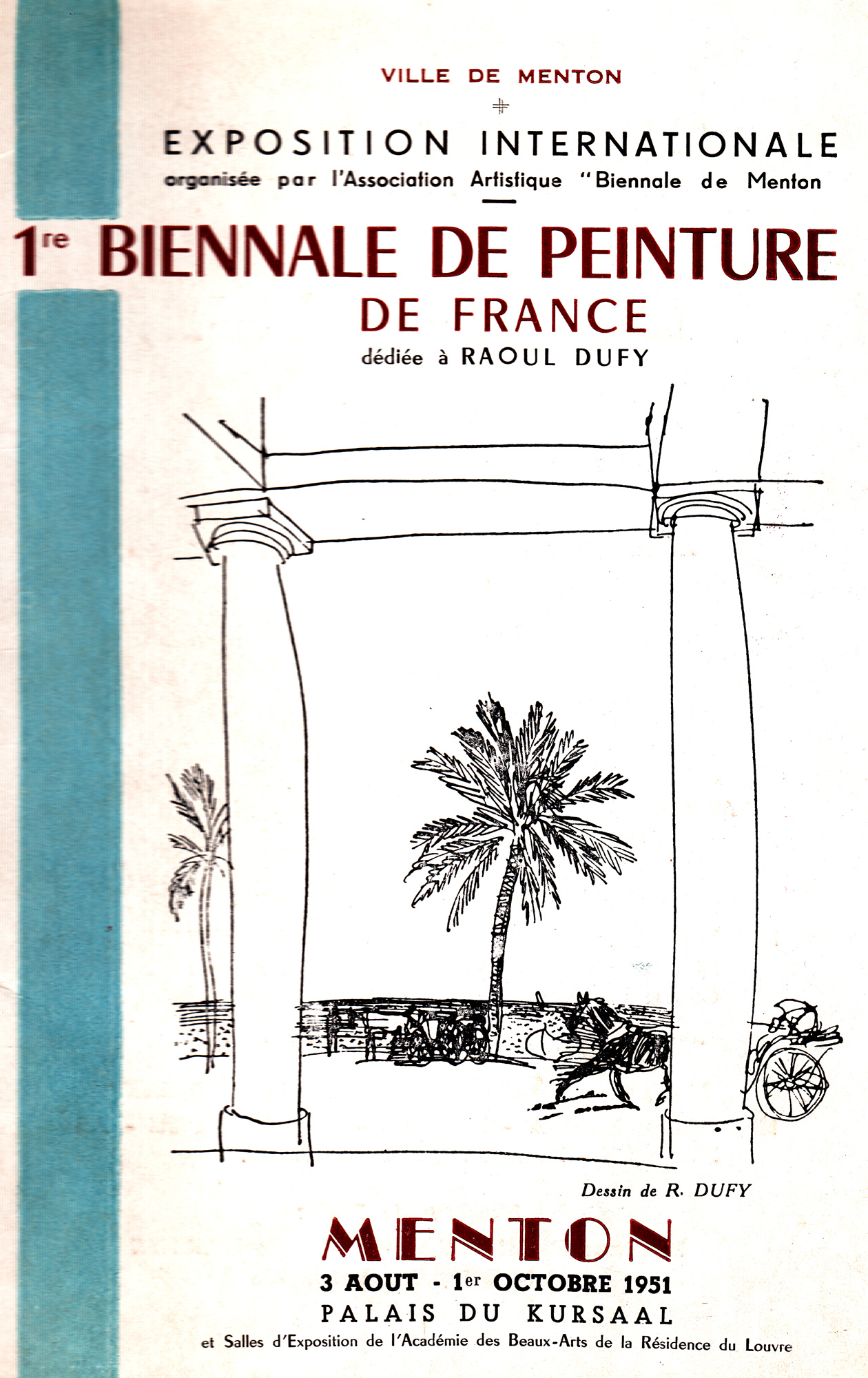 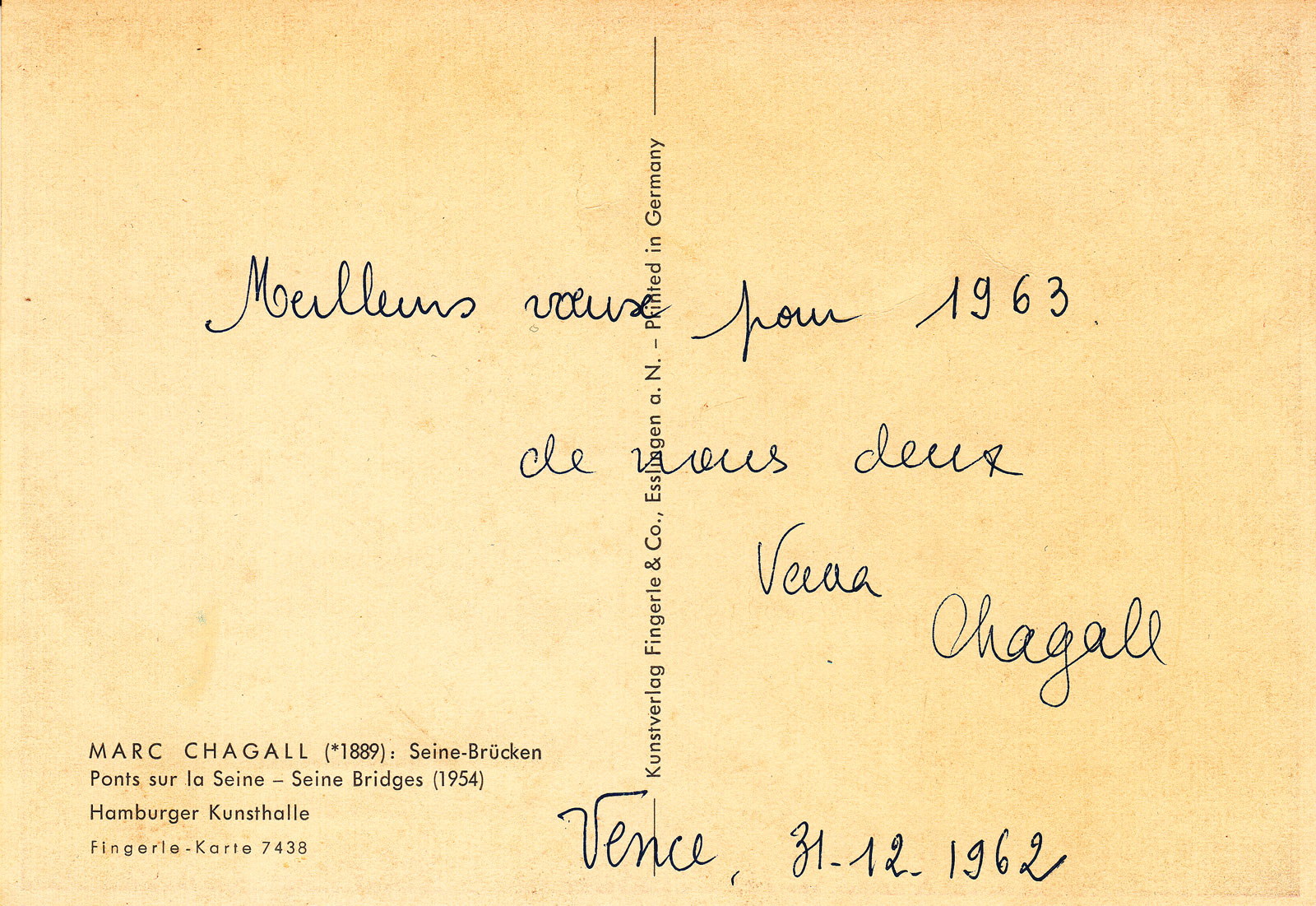 New Year greetings to Limouse from Vava, the last wife of Marc Chagall. The latter artist was the honoured guest at the 1968 Biennale. Chagall was among the few celebrities who proved their loyalty to Limouse and his programme for the Biennale. 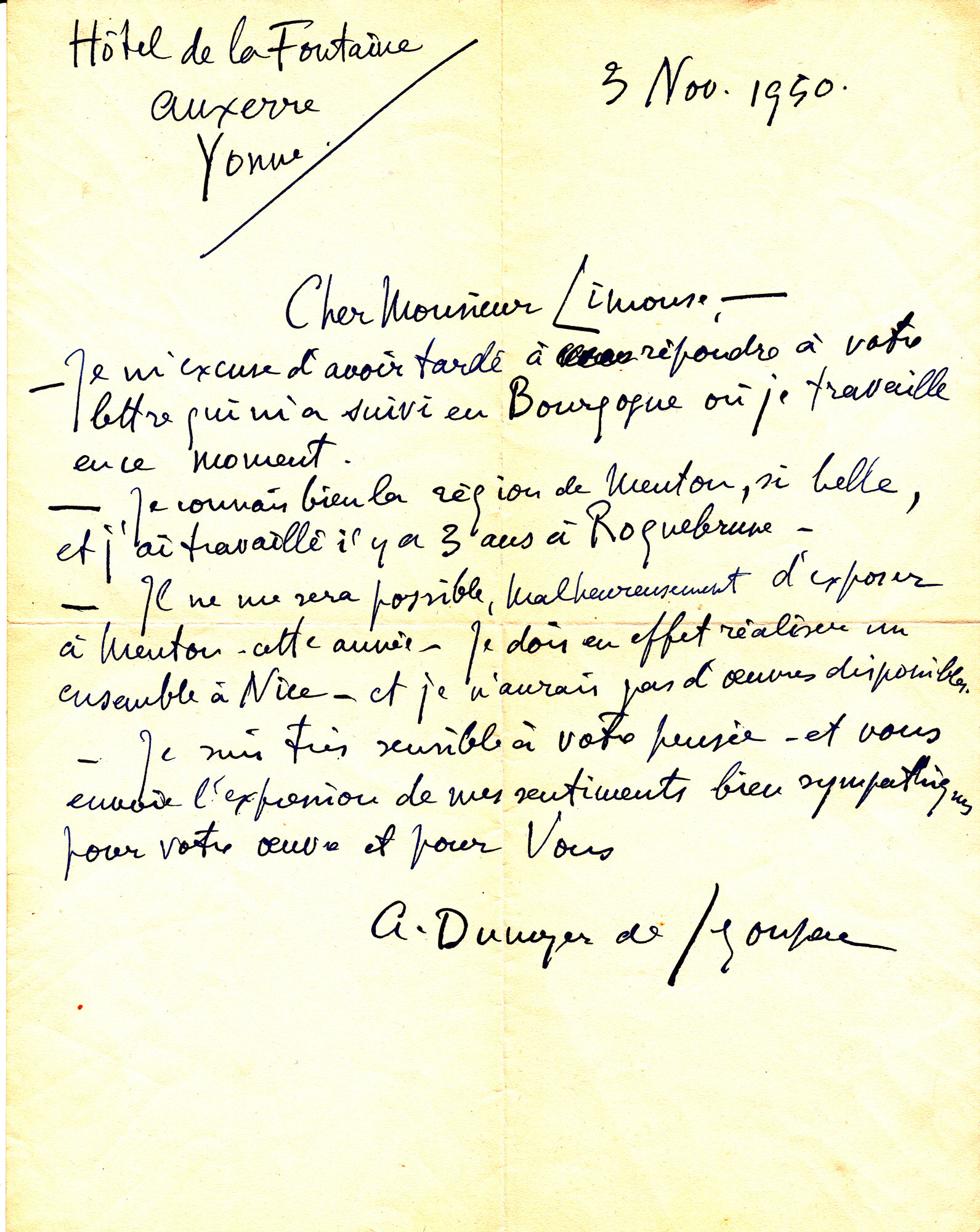 Among the artists who rallied to defend Limouse’s biennale, Jacques Villon and Dunoyer de Segonzac. 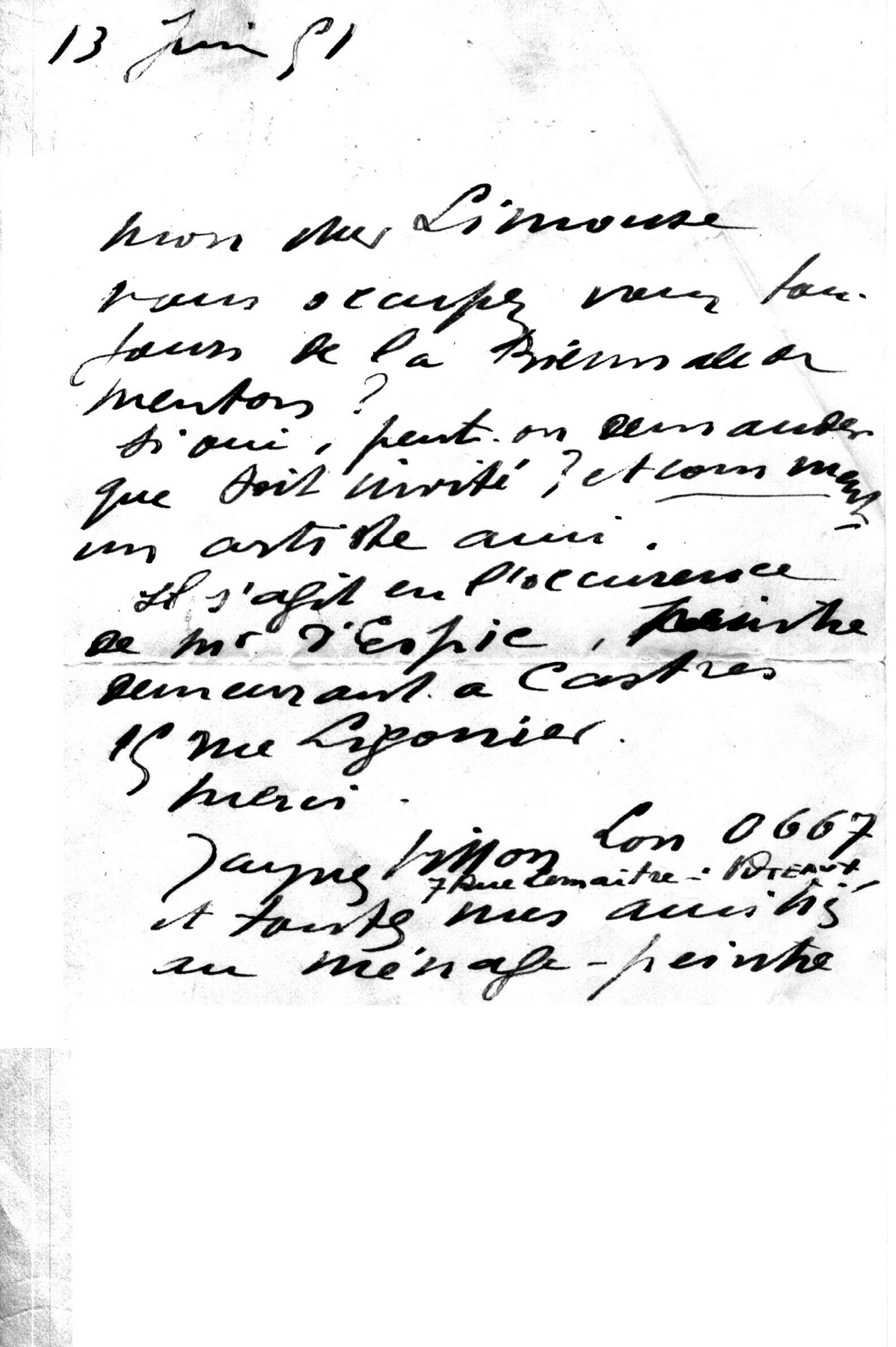 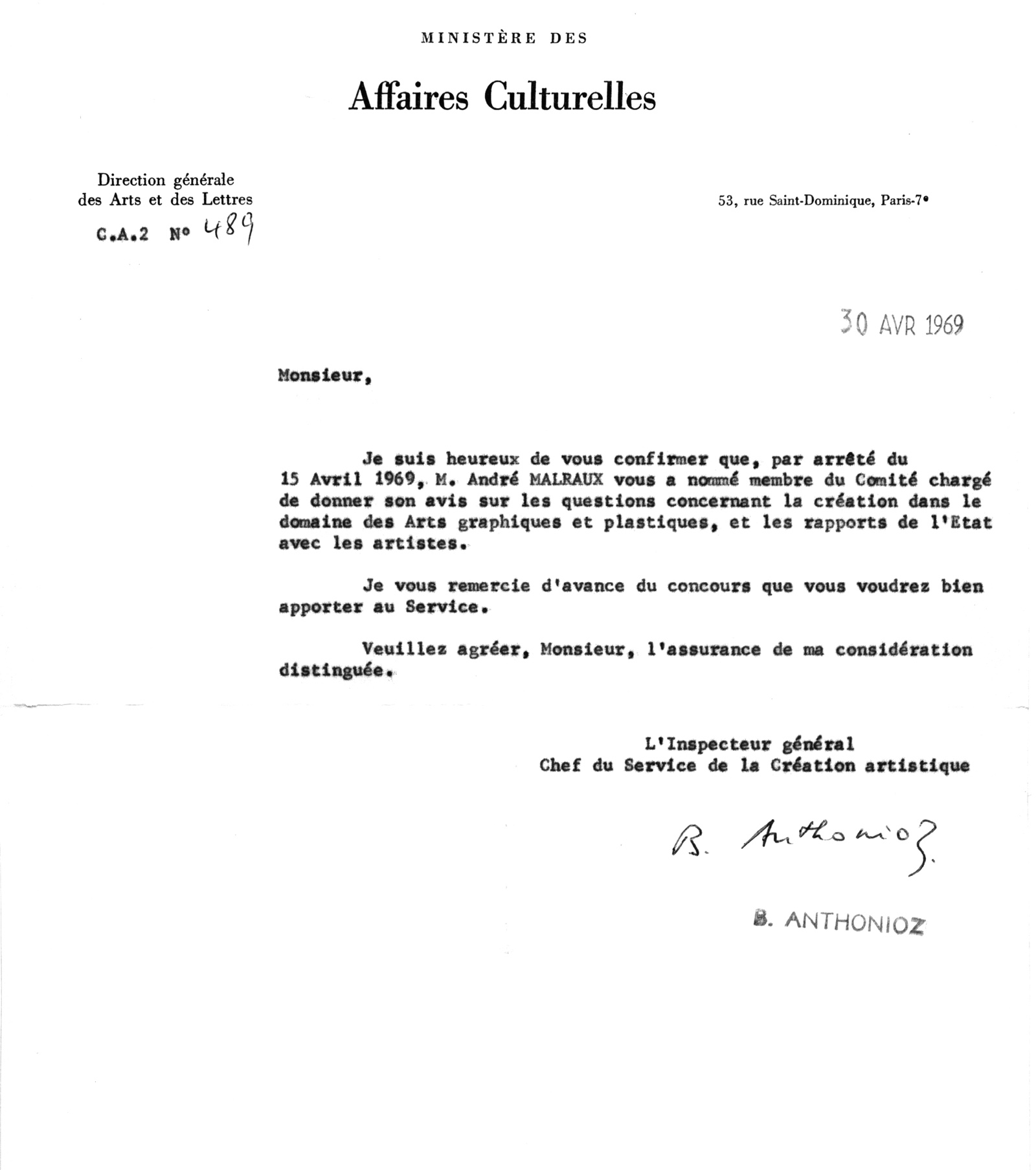 A final testimony of André Malraux’ esteem for Limouse. 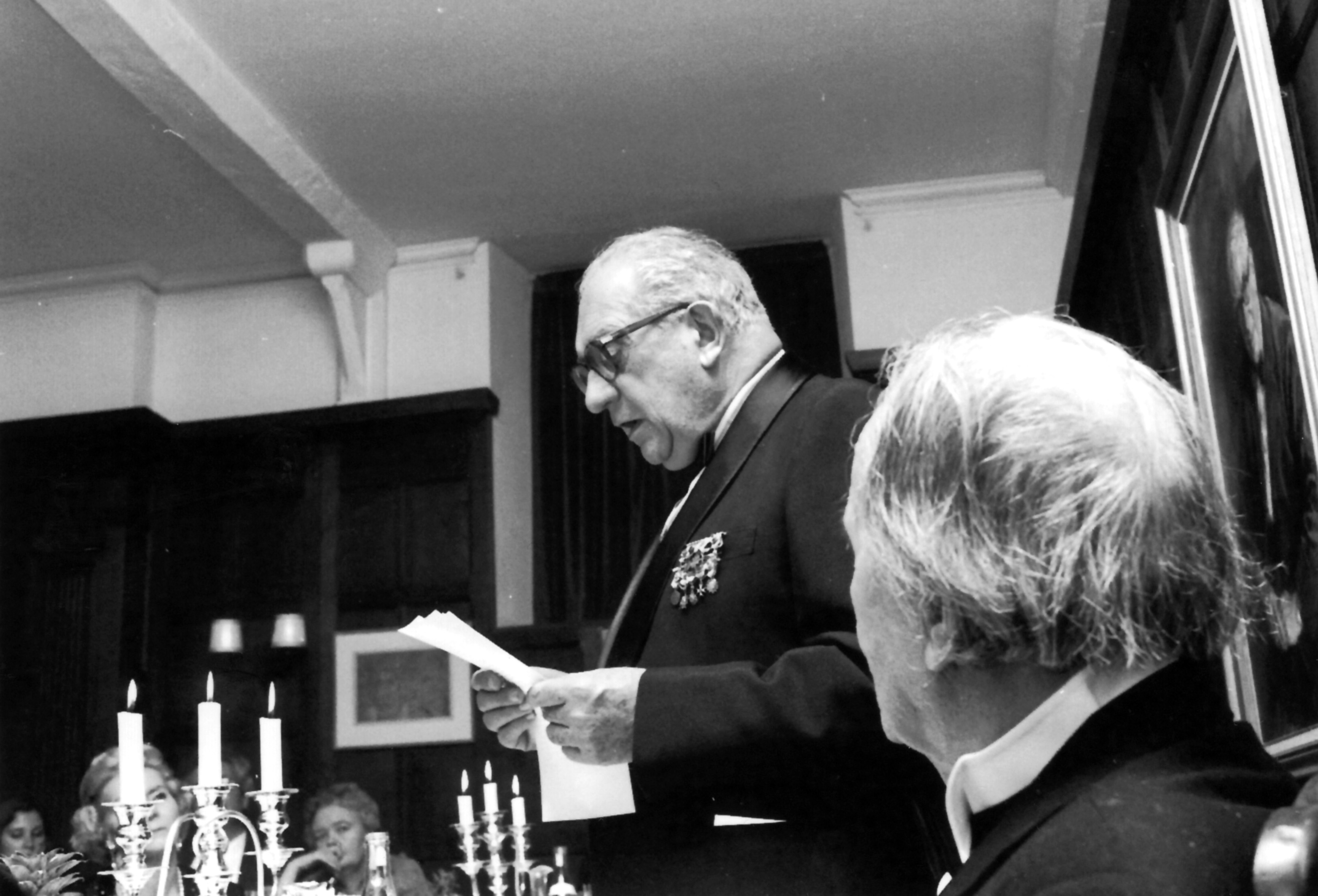 The solemn tribute to Limouse (left) addressed on 18 October 1985 by Jacques Soustelle, representing the Académie Française. The occasion was a grand reception given at Oxford University in honour of Limouse, the artist who interpreted The Flowers of Evil, the poet’s exegete and defender of Baudelaire’s aesthetic convictions as art critic.