“The forcefulness and abruptness of his palette, the richness of his harmonies with their ample use of vivid unmixed colour, his impetuous brush-strokes which seem intent on dragging objects to the very extremity of a composition, are in contrast with the modesty and calm of the painter. The analyst turned professor of aesthetic perspective at the Ecole Nationale des Beaux-Arts, in a post specially created for him, spends endlong hours disassembling a picture and then reassembling its anatomy with an understanding of which few painters today possess even a hundredth part; and therefore, when he “talks painting”, Limouse leaves us wholly convinced that he has gone to the root of the matter, that he appreciates its every difficulty, that he has followed all the mysterious twists and turns of the creative process.” 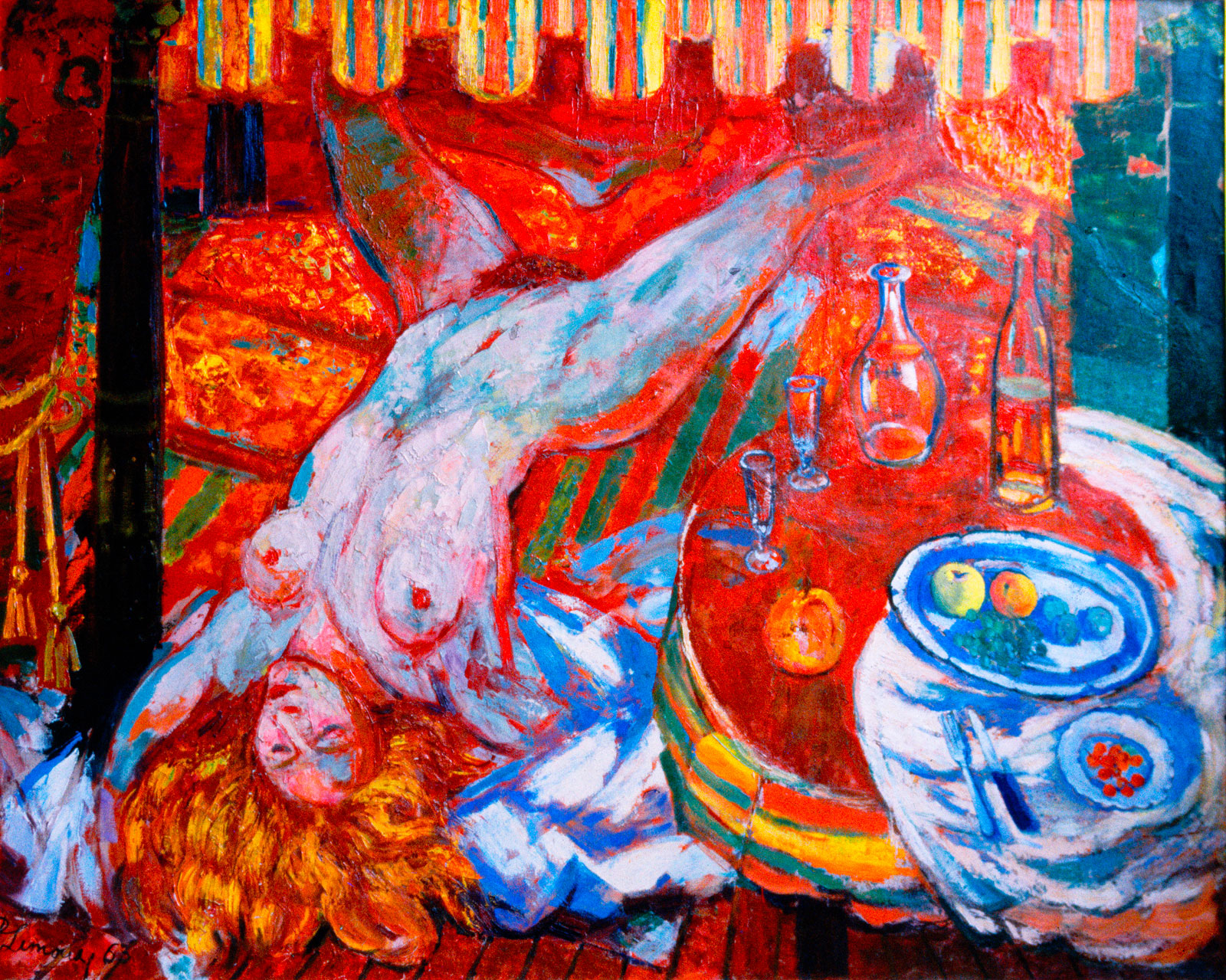 You who twist calmly in your ill-posed plight

Those charms that could make Titans’ mouths replete!

This arrestingly vivid painting reflects the contrast in Baudelaire’s captioning sonnet between insipid travesties of beauty and the poet’s own ‘red ideal’ interpreted by the artist in the present work. Having opted decisively for the latter, Baudelaire had announced in his tercets that he could be satisfied only by an audaciously criminal Lady Macbeth, or with Michelangelo’s boldly sculpted figure of ‘Night’ which adorns the Medici Chapel. Limouse fashioned his canvas according to the intensely visual lines of the second tercet describing Michelangelo’s ‘Night’, and he tackled here the problem of working from a transposition d’art by taking certain features noted in the poem (here a curious pose and conspicuous breasts), yet subsuming them in an entirely reconceived composition.

Thus we are presented not with a meditative stooping figure but with a passion-sated nude recklessly pouring herself towards us, head-first and breasts uppermost, over the edge of what has clearly been a bed of love. Not only the woman’s flesh, still obviously aglow with sensuality, but the pillows and far wall, the canopy and hangings of her four-poster, the bedside table bearing wine and fruit (which has shed most of its cloth in a sort of complicit abandon), and that ample chevelure tumbling riotously to the floor — all vaunt the triumph of an ubiquitous orange-red which suffuses the canvas. The entire composition, obedient to Limouse’s provocatively fiery palette, purposefully conveys the drama of the scene with a sure-footed masterliness that would undoubtedly have rejoiced the heart of Baudelaire, the great admirer of Delacroix.

This large canvas has attracted great critical acclaim. The French critic Frédéric Charmat noted how carefully the composition had been planned, based on the golden section and the X formed by the outspread body of the nude, allowing the eye to set out in any of four directions from the centre of interest between pudenda and navel. He marvelled at its complex combination of passion with cool reflection, of lyrical audacity with respect for the accumulated wisdom of the ages.